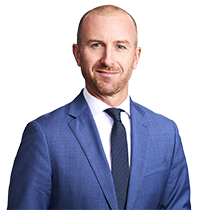 Scott is a partner with Gardiner Roberts and member of the Dispute Resolution Group. Scott joined the firm as an associate in 2009 and also summered and articled with Gardiner Roberts prior to that time. Although Scott conducts a general corporate/ commercial litigation practice, he is most often involved with banking and brokerage disputes, fraud cases involving complex injunctions and interlocutory motions, as well as professional liability matters involving investment advisors and lawyers. Scott’s practical, creative and proportional approach to litigation has served his clients well and generated excellent results. Recently, Scott successfully defended one of Canada’s largest banks and brokerages in  a  Superior  Court  of  Justice  trial  involving  an  investment  product  that  had previously never been the subject of litigation in Ontario. He also acts as a prosecutor for various Conservation Authorities regarding the prosecution of offences under the Conservation Authorities Act in the Ontario Court of Justice.

Scott appears regularly as counsel in the Superior Court of Justice and has also appeared as counsel before the Divisional Court and Court of Appeal for Ontario.

When not in the office, Scott enjoys spending time with his wife and kids exploring the country side and relaxing at the cottage. Scott can also be found on the golf course, ski hills or various whitewater rivers throughout Eastern Canada.