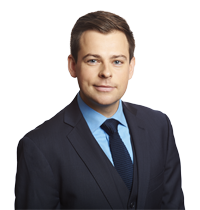 Alexander is a partner in the firm’s Litigation and Dispute Resolution Practice Group. Alexander has experience in a broad range of complex commercial litigation matters, including with respect to professional liability for lawyers, real estate agents, title insurance, contractual disputes, and shareholder disputes. Alexander has successfully represented clients at various levels of court in Ontario.

Alexander is an avid runner and regularly competes in long distance races, including marathons and half-marathons. In addition, Alexander enjoys playing a wide range of sports, including golf, softball, and snowboarding.

When he’s not in the office or running around Toronto, Alexander enjoys spending free time with his wife, Jessica, and his two dogs, Winston and Olive.